The soft fruit season has started, first with the strawberries, quickly followed by raspberries. Already this week I have picked about 10 lb of raspberries and when I went out again today, I realised I would need to spend another hour tomorrow having a good pick.

Raspberries do freeze well for making into jam later so most of the raspberries have been bagged up and popped into the freezer. I do, however, like to eat as much as possible without getting fed up with the glut. This weekend I made a trifle, some ice-lollies and some flapjacks with the raspberries. I would like to share the flapjack recipe with you as it is a tasty way to use up some raspberries but it is also a versatile recipe that can be adapted easily by simply changing the fruit used for the filling.

Place the raspberries, sugar and apple juice in a pan and heat gently until the raspberries breakdown. Run the mixture through a sieve to remove the seeds then return it to the pan. In a small jug, mix the cornflour with a little water to make a thin paste. Preheat the oven to 190°C and grease a shallow tin. In a large saucepan, melt together the honey, brown sugar and butter. Remove from the heat and stir in the oats. Tip half the oat mixture into the tin and press down firming with wet fingers. Gently heat the raspberry liquid and pour in the cornflour, stirring constantly and continue to stir and heat until the mixture becomes thick. Remove from the heat and spread over the oats in the tin. Tip the remaining oats on top and cover the raspberry filling with them. Bake for 20 to 25 minutes. Remove from the oven and mark out into 12 flapjacks whilst still hot and allow to cool in the tin. 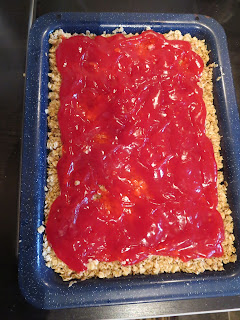 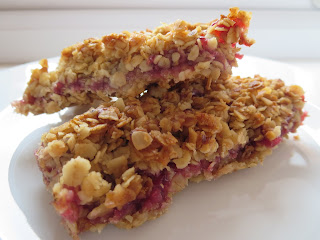