I always aim to eat homemade bread with dinner once a week as an alternative to potatoes, rice or pasta. Tonight I whipped up a batch of individual focaccia bread. I say "whipped up" as if it something you can do in 5 minutes but of course it takes about 3 hours to make bread from scratch. Although that sounds like a long time, there is very little of that time when I'm actually needed, particularly as I use a bread machine for the first hour and a half for mixing, kneading and resting. It does mean a bit of forethought and planning and being around at key points but whilst the bread was making I managed to make a cake, do the washing up, pick some strawberries, bring in the washing and have a bath.

I made the focaccia bread recipe for the first time last month, adding a spoonful of my green garlic pesto to it for a bit of flavour. One way or another it must have worked because the family raved about the bread. The recipe had made 8  individual portions of bread and so I served up one each, thinking I might freeze the other four to reheat for another meal at a later date. However, having eaten her bread with enthusiasm, my daughter eyed up the remaining bread and asked if she could have another. I explained my plan to her but she looked at me with her big eyes and said, "But it is always best when it's fresh." This sentiment was quickly supported by her dad and between them they decided it was a good idea to eat another one each. Personally I was satisfied with just having the one with the meal and my youngest daughter was full up with her portion, so I was left with 2 pieces at the end of dinner. What was I to do with those when there was no longer enough for another meal? Hmmph! 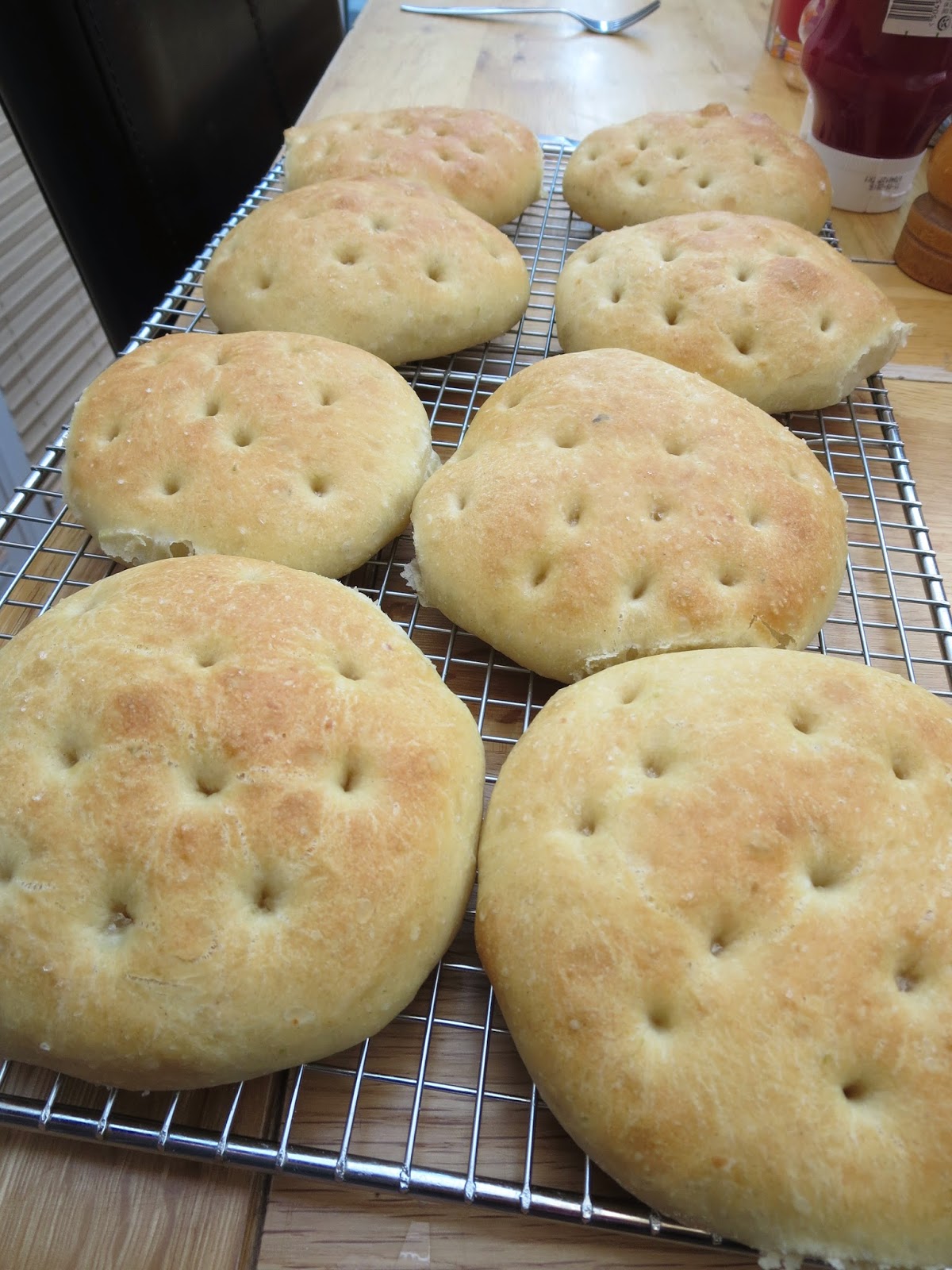 The next day, come lunchtime, I contemplated the remaining focaccia and wondered how to make a sandwich out of it. I quickly dismissed this idea and wondered about turning it into cheese on toast instead. Even better, why didn't I smear on a bit of passata first, sprinkle on some herbs, top with cheese and call it a pizza? This was a brainwave and was delicious... so much so, that I went back for seconds and made the last focaccia into another mini pizza and scoffed that too! 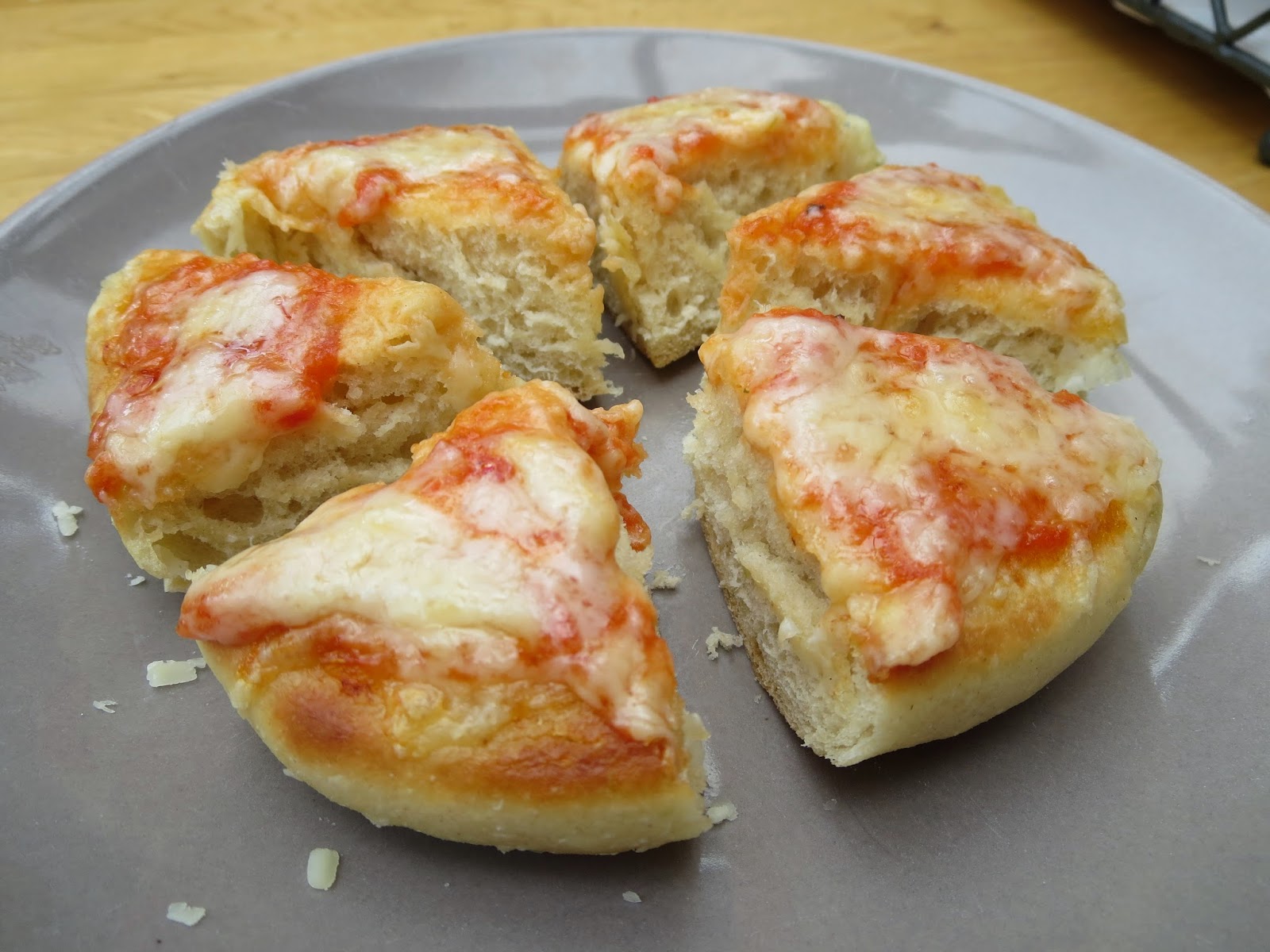 So tonight when I made the recipe again I was quite determined not to eat two for dinner so that I would at least have one for tomorrow's lunch even if the rest of the family pigged themselves on two. I'm pleased to say that one and half weren't eaten and I'm rather looking forward to tomorrow's tasty lunch.

Put the water, oil and pesto into the bread machine pan then add the flour then the salt, sugar and yeast. Set the bread machine onto the dough setting. When ready, remove the dough from the bread machine and knock back on a lightly floured surface then divide into 8 equal pieces. Roll each piece into a ball then flatten slightly and roll out a bit with a rolling pin. Place on a greased baking tray and cover with oiled clingfilm and leave for half an hour. Preheat oven to 200°C, gas 6. Poke the surface of each piece of bread with the end of a wooden spoon to indent all over. Drizzle over olive oil and sprinkle with coarse sea salt. Bake for 20-25 minutes until golden and serve hot or cold.
Posted by Jammy Cow at 14:41