So when is is acceptable to eat four cheesecakes for dessert?

When they are the size of an ice-cube.

There I was absently scrolling through my Instagram feed this morning when I came across the idea for mini cheesecakes made in ice-cube trays. It was one of those moment when I just knew I had to give them ago and, luckily, I happened to have all the required ingredients to hand so by dinner time we were tucking in to the daintiest little desserts you could imagine. Your life is not complete unless you try these! 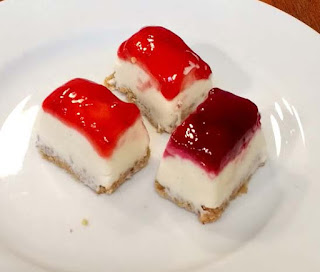 Ice-cube trays vary in size considerably so the size and quantity of your cheesecakes will be dependent on your tray. I would recommend the biggest you have so they are less fiddly to make.

Cover the bottom of each ice-cube hole with a little jam then place in the freezer whilst you prepare the filling. Mix together the mascarpone, cream cheese, sugar and vanilla. Spoon this mixture into a sandwich bag and cut off the corner so you can use it like an piping bag. Pipe the filling into each cube hole until it is three quarters full. Smooth out with a teaspoon or a wet finger. Place in the freezer for half an hour. In the meantime, blitz the biscuits and granola in a food processor until crumbed then mix with the melted butter. Remove the ice cube tray from the freezer and spread the biscuit mixture over it and lightly press into each hole. Return to the freezer for at least an hour. Remove from the freezer and carefully pop each cheesecake out of the tray. I found that a plastic knife gently pushed down the edge of each cube helped to extract them. Stand each cake on its biscuit base and put in the fridge to thaw out until required.
Posted by Jammy Cow at 15:52 No comments:

For the Love of Lemon Curd

As a maker of jam and marmalade, it seems only logical that I should also make fruit curds. And I do, occasionally. But only occasionally. There are a number of reasons for this. Firstly, curds usually involve citrus fruit and these are not something I grow. Secondly, because they contain butter and eggs, they ideally need to be kept refrigerated and consumed within a few weeks so they are not something I make on a whim but instead only when I have an order for them or an event coming up. And finally, they are a bit of a pain to make, requiring slow but frequent stirring and then a kind of magically guesswork to figure out if they have set. Usually I start to lose patience with the whole thing and will it to be set before it properly is, resulting in an unsatisfactorily thin curd.

When made well, home made lemon curd is a beautiful thing. Custard yellow and as thick as trifle, it has a zingy citrus bite that makes my mouth water just thinking about it. It goes beautifully into a lemon layer cake and can be stirred into yoghurt, rice pudding or porridge to transform them into tasty desserts (or breakfasts, or elevenses even).

Recently I discovered that it is possible to make lemon curd in a pressure cooker. It is such a simple thing, requiring the measuring and mixing of ingredients, set up of the pressure cooker and then just the release from the cooker and a good stir at the end. How wonderful it is to able to let it get on with it and not be tied to the endless stirring and wondering if it is done yet. Since discovering this I have had a constant supply of lemon curd in the fridge and it hasn't once failed to turn out beautifully.

So, having turned curd making into an easy and successful process, I now feel confident to offer it as one of my preserves for sale. But with locally sourced ingredients being essential to my products, it didn't seem right to offer a basic lemon curd. I have in the past dabbled with curds that use locally grown ingredients and there is no doubt that Roasted Rhubarb Curd, or Strawberry & Orange Curd, or even Rhubarb & Lemon Curd are tasty but there are, nonetheless, not Lemon Curd - plain and simple. As such, I turned to the other ingredients and decided that if I could source local eggs then we were back in business. 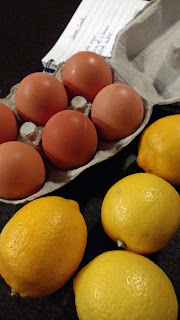 It was my friend Emma who suggested I pop along to Two Mile Ash Farm for my eggs. They don't have a farm shop as such, instead they have a vending machine in their driveway stocked with apple juice, honey and eggs. An odd, yet workable solution. Having put my coins into the slot I was able to open a sliding door to a compartment to take out a box of eggs. With local eggs sourced, it was time to put Lemon Curd onto my list if preserves for sale. 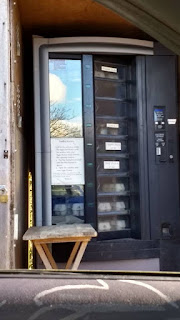 Having announced this, Buskers were keen to order a large jar with their usual jam order and the delivery of the curd was met with an excited shout of, "Get some toast on, the lemon curd has arrived!" I presume there was enough in the jar that there was some left for the customers once the staff had had their fill. Keep an eye out for it there and also at my events in the future. Now that it is back on the menu, you'll not want to miss out and if you don't want to just spoon it out of the jar and into your mouth, here's my lemon layer cake recipe. 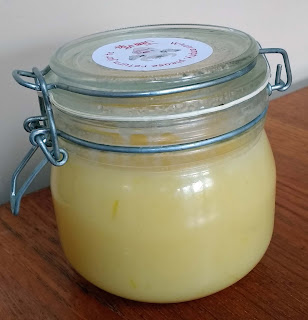 Preheat oven to 180°C, gas mark 4 and grease and line 2 circular sandwich cake tins. In a large bowl, cream together the margarine and sugar then stir in the eggs one at a time. Add the juice and zest from the lemon then stir in the flour and baking powder. Spoon the batter fairly between the two cake tins and level out. Bake for 20 minutes then turn out the cakes onto a rack to cool. Once cool you can decide whether to just have lemon curd between the two cakes or if you feel brave enough to attempt to cut the cakes in half to make 4 cake layers. Assemble the cake by putting a layer of lemon curd between each cake layer. To finish, make up the icing by mixing the icing sugar with the zest and juice of another lemon then pour the icing over the cake. 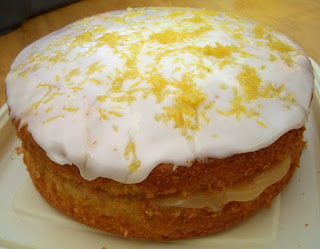 In support of British Sugar

The whole point of Jam Moo Kow is to make jam and chutney from locally grown ingredients. Generally this involves me and my family growing the main ingredients - i.e. the fruit or the vegetables. Indeed, it is the availability of ingredients that determines what is made. Obviously, it is also necessary for me to barter or buy other ingredients. I like to source the beer, cider, cider vinegar, brandy and whisky used in my products from Concrete Cow Brewery and Virtual Orchard. Carol supplies the honey used in my Honey & Lemon Marmalade, and I use local eggs in my curds. But on top of that I need to buy in things such as spices, citrus fruit and, of course, sugar.

As you might imagine, I get through a heck of a lot of sugar so it is important to me to source that as locally as possible. To be honest, this has never been an issue as Silver Spoon make this easy. They grow sugar beet in East Anglia (really not many food miles way) and turn that into granulated sugar that is conveniently sold in all the major supermarkets... Well, actually that is not true. I have always turned my nose up at the huge 20kg bags of granulated sugar that Costco sell as these are Tate & Lyle. Despite Silver Spoon being supported by Waitrose and their products available to buy in store, it is only possible to buy Tate & Lyle sugar when ordering from Ocado. And now, it seems Tesco has turned its back on the brand.

It was the middle of January when I first noticed Tate & Lyle sugar taking the space that Silver Spoon sugar had always occupied in my local Tesco store. I hoped it was merely a supply issue but this week news broke that Tesco have ditched Silver Spoon as a supplier in preference for Tate and Lyle. Their reason for this - to provide their customers with the cheapest products.

So let's take a look at Silver Spoon for a moment. In fact, have a look at their 4 minute explanatory video. Here they describe how sugar beet is grown by East Anglian farmers and processed in a factory in Bury St Edmonds into granulated sugar. The waste from the sugar beet is turned into animal feed and the waste energy is used to grow tomatoes. 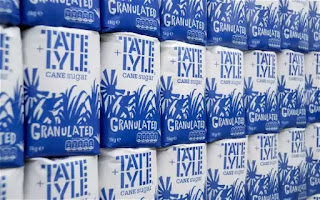 For comparison: Tate & Lyle has a long history, going back to 1878 when Tate started processing sugar in London. The company grew and expanded to become Tate & Lyle during the Victorian era. However, in 1981 European restriction on sugar cane led to the closure of one of the London refineries and now forces the company to only run their remaining plant 5 days a week, which unfortunately means it is less energy efficient because of the stop/start. Processing for Tate and Lyle also takes place in other European countries such as Portugal, Germany and Italy. In October 2010 the whole company was taken over and is now owned by American Sugar Holdings. Tate & Lyle sugar uses sugar cane as its crop and this can only be grown in tropical countries. Most of the sugar cane comes from developing countries such as Belize and they do work within Fair Trade rules. Once harvested, the cane is processed locally into raw sugar and then transported by sea to the refineries in London and Europe for further processing and bagging. 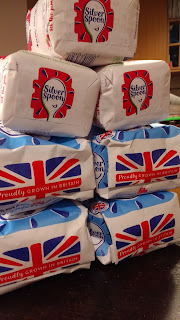 As is so often the case, on the face of it, the imported product should work out more expensive but it is in fact cheaper. Tate & Lyle sugar has always been cheaper but now, in the face of a weak pound (which you think would make it more expensive!) and prices across the store going up, Tesco have taken the decision on behalf of its customers to go with the cheaper product to keep prices down.

With so many products available and only a certain amount of store space, I understand that all supermarkets have to make decisions about which products and brands to stock but it does aggravate me that they have decided that price is the most important consideration for shoppers and to take away their choice to support a British industry and limit food mileage.  With wonky veg and overly cheap milk, supermarkets are not looking at all supportive of British farming right now.

Anyway, at least now Tesco have made their sugar choice public and I can vote with my feet. Yesterday I popped along to my local Asda store to stock up on Silver Spoon sugar and I can only hope that they continue to support this British brand. Whatever the supermarkets might think about being the need to be cheapest, sometimes there are things more important to consumers than a few saved pence.