Yoghurt has never been a subject to get me fired up one way or another. It is probably the definition of neutral. Inoffensive... unless you have a dairy allergy. Uninspiring. It is not the sort of thing I find myself irresistibly drawn to. I don't sit there, trying to suppress my urges to eat yoghurt or throw open the fridge door, wondering what to eat and think - my God, let's have yoghurt!

OK, I think you get my point. It is, however, pretty much a household staple and that must be the case in most households given that supermarkets dedicate a double-sided aisle to the stuff. It must be a vast industry. Certainly my kids get through a fair amount of the stuff, as does Steve. Quite honestly, I don't usually bother. Often we have Frubes or similar tube yoghurts that are easy to squeeze directly into the mouth without a spoon and so are handy for lunchboxes (once your child is old enough to execute successful opening and mouth-squeezing without squirting it all over themselves, that is). My girls are also very keen on "corner" yoghurts, one preferring the ones with fruit compote and other the ones with rubbishy chocolate coated cereals. I only ever buy those when they are on offer (which does seem to be most of the time) and then you have to by two packs at once which seem to take up an inordinate amount of space in the fridge. I have dallied with cheaper versions of these from the likes of Lidl and Aldi but the fussy of the two daughters soon declared that the yoghurt in these tasted like emulsion paint. I wasn't aware she'd ever tasted emulsion paint but I think I got her point.

The other day I was flicking wistfully through the Lakeland catalogue, mentally making a Christmas list in case anyone should ask what I wanted this year. As usual, they had a section dedicated to yoghurt making. Usually, I thumb past this fairly swiftly as yoghurt making has never held any appeal. It was something my mum used to do in the 80s when I was a kid and it seemed to involve various Tupperware-type plastic containers that created tasteless yoghurt that I didn't much fancy. I was, after all, a kid of the 80s where Angel Delight in lurid colours and vivid flavours could be whipped up in minutes with the help of a Kenwood mixer. Why would I want to eat natural yoghurt?

Nonetheless, I found myself hovering on the yoghurt making section a little longer on this occasion, reading the descriptions and working out exactly what you would get in a kit and trying to decide if this was something I might like to put on my Christmas list. I confess that I have moved a long way foodwise since I used to think that a powder whisked up with milk was some sort of treat yet here I was wondering if I wanted to put a sachet of powder into milk to make flavoured yoghurt at home. How, I found myself asking, was this different from buying a yoghurt from a supermarket except they had already added the powdered ingredients to the yoghurt for you?

In the end "Yoghurt making kit" didn't make it to my Christmas list but it did inspire me to Google yoghurt making to see what exactly was involved. It turned out that it required little more than some milk, a saucepan, a thermometer, thermos flask and a pot of natural yoghurt. I figured it was worth a go so duly bought some whole milk and a small pot of organic natural yoghurt.

It really was a simple process to make the yoghurt and I was surprised by how successful the result was. With enthusiasm, I fed some to my children. As usual the non-fussy eater loved it and the fussy one was less impressed. She tried sweetening it with honey, which helped, but declared it too thin and runny. Not deterred, I returned to the internet to google the method for making Greek yoghurt. This was something I had read about and I knew that real Greek yoghurt is made by sieving it. This does reduce the overall yield of yoghurt so makes it more expensive. Many manufactures of "Greek-style" yoghurt use thickeners instead to maintain the quantities and to be able to sell it cheaper... not something I'm keen on.

It turned out that making Greek yoghurt was also very simple. I lined a nylon sieve with a piece of scalded muslin and tipped my homemade yoghurt into it. It then dripped for an hour, the whey accumulating in a bowl below, and the yoghurt above getting thicker as a consequence. I then used a spatula to scrap the thick yoghurt back into its container. It did dramatically reduce the amount of yoghurt I had but it was as thick and luxurious as whipped cream.

On the occasions that I get a posh dessert from somewhere such as M & S, I tend to keep the plastic container and squirrel it away in the back of my cupboard to making my own posh desserts. One afternoon I took out one such container - something a little larger than a shot glass - and spooned some raspberry jam into the bottom of it. On top I added some of my lovely thick homemade yoghurt and topped it with a sprinkling of my granola. It certainly looked the part and I sat down with excitement to eat it... yes, excited anticipation for a yoghurt! I stirred it all together and tucked in and, my God, it tasted amazing. I mean, really amazing! The humble yoghurt had been transformed into something you would expect to find on the menu at a high class restaurant. The flavours positively zinged around my mouth. Later I whipped up another couple of these and presented them without comment to my girls. They eyed me questioningly, stirred the concoction together and then their faces light up as they tucked in.

It was a funny thing really as it had take only a minute or two to put the dessert together so it seemed like a ridiculously simple dessert - jam from a jar, yoghurt from the fridge, granola from the cupboard. However, when I thought about it I realised that I had grown the raspberries, made the jam, made the yoghurt and made the granola. If taken as a whole process the dessert had taken literally hours to make. But you know what, you could really tell. When you taste food like that you really find yourself wondering what the hell they do in factories to make food taste so flat. Needless to say, I won't be going back to shop bought yoghurts in a hurry but instead will enjoy experimenting with lots of different flavours of jams, and fresh fruit come the summer, and will try to convince my fussy daughter that there is more to yoghurt than chocolate coated cereal. If only I could source corner shaped pots then I think I will have cracked it! 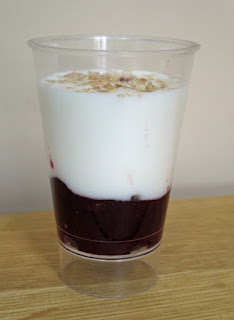 Pour the milk into a saucepan and heat gently to 80°C - you will need to have a thermometer in the milk to monitor this. Remove the milk from the heat and monitor the temperature. Once it reaches about 42°C add the yogurt to it and stir in. If it is cold from the fridge, this will bring the overall temperature down to 40°C. Pour the mixture into a 500ml capacity thermos flask and leave to stand for 4 hours. After 4 hours, pour the yoghurt into a suitable plastic container and put it into the fridge to finish setting. You can eat it as this point or add it to smoothies or use it as a yoghurt drink. To make a thick Greek yoghurt, scald a piece of muslin with boiling water from the kettle and line a nylon sieve with it. Pour the yoghurt into the sieve and leave it to stand for an hour. Tip away the whey and scrap the thick yoghurt back into the plastic container and return it to the fridge until you wish to eat it. It will keep in the fridge for about two weeks.