Having dabbled with making home made pork pies a few times now, I have finally decided I am happy with this recipe. Making individual pork pies is easier than one large raised pie - they take less time to cook and are more likely to be cooked all the way to the middle, and it is possible to cut one open and taste it to check it is OK before putting it out there for the audience to enjoy. To my taste, a pork pie just isn't the same without white pepper and mace but it is worth frying a little filling off to check the seasoning before assembling the pies. Remember that the jelly will add a little more salt to the overall flavour. I use bone broth to add the essential jelly component and this works really well as it is naturally set when cold. Alternatively use half a stock cube in 300 ml of boiling water and 2 small sheets of gelatine. Making the pies in a muffin tin is easy, although I am informed that hand raising the pies is straight forward too, pulling the larger circle of pastry up over a ball of meat before putting the lid on it to hold it in place. I may try that next time. Removing the pies from the tin can be a little difficult if not well greased so not having this element would be handy. Once chilled, serve as part of a buffet or lunch or as a snack with a good dollop of chutney. 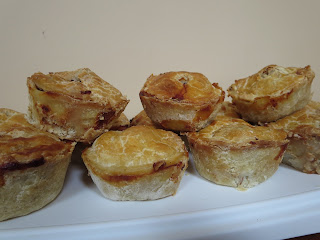 Using scissors, cut the pork up into small pieces and place in a bowl. Snip up the bacon and add to the pork. Add the seasoning. To check the seasoning, fry a small amount of the filling until cooked and taste. Preheat oven to 190°C and grease a 12 hole muffin tin. Next, put the flour in a bowl and add the butter. Rub the butter into the flour to form a breadcrumb texture. Put the lard in a measuring jug and microwave until melted. Add the salt to the lard and then measure in the boiling water. Pour this mixture onto the flour and stir with a spoon and then your hands to form a dough. Leave to cool until just cool enough to handle then cut into two pieces - one about two thirds of the pastry, and one about a third. Roll out the bigger piece of dough to about 3mm thick. Cut out 12 x 10cm circles of dough and line each muffin hole with the circles of pastry. Spoon the meat mixture into the muffin tin until each pastry case is well filled. Roll out the remaining piece of pastry and cut out 12 x 6cm circles. Place a circle of pastry onto each pie to form a lid and press gently to seal the pie shut. Use a skewer to make a hole in each lid about 5mm in diameter. Brush each pie with beaten egg then bake the pies for 50 minutes until golden brown. Once the pies are cooked, heat the bone broth to turn it into liquid. Use a small funnel to help you pour broth into each pie until it just overflows. Once the pies are cool, place in the fridge to chill over night or for a couple of hours. Once chilled, remove the pies from the muffin tin and chill until ready to eat. 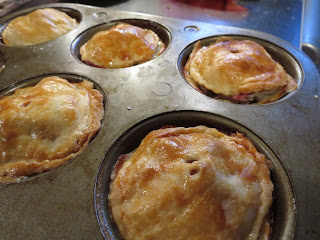 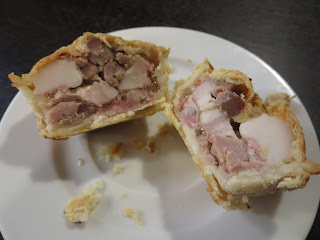 Having got back from the plot later than anticipated on Sunday evening but loaded up with seasonal vegetables, I was faced with the issue of  having to quickly decide what vegan version of a roast dinner I could cook. My vegan step-daughter has been living with us since mid-June now and I have been cooking her dinner every night so vegan cooking is not an issue in itself - just an added task. When making dinner starts with going out to gather the ingredients, it is very much slow food anyway.

I glanced around at the ingredients I had to hand, both freshly picked and supermarket bought, and quickly decided that my best bet would be a stuffed roasted butternut squash. Having cut the rounded bottom end off it and hollowed out the seed cavity, I rummaged around for something suitable to stuff it with. Being August the seasonal vegetables have a Mediterranean slant to them so I decided these were the flavours to aim for. Courgette, mushrooms, red onion, red pepper, garlic and herbs de provenance came together within a few minutes to create a delicious smelling stuffing. This I spooned into the hollow butternut, leaving a few spoonfuls that wouldn't quite fit. Smelling so tasty, it seemed a shame to waste it but it was just too much to fit in yet there wasn't enough to make another meal out of it.

With the squash in the oven, it was time to turn my attention to the meat for the rest of the family. A small rolled lamb shoulder sat in the roasting tin, neatly held together by four elastic bands. Then it occurred to me that it was just crying out to be stuffed, so I took the elastic off it, unrolled it, spooned in the last of the stuffing and reassembled it.

An hour later dinner was ready - an impressive stuffed roast butternut squash for the vegan, and roast lamb with a Mediterranean stuffing for the rest of us. A roast with the taste of summer for everyone. 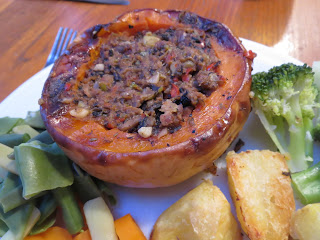 Cut the crusts off the slice of bread and put it into a small food processor and blitz to create crumbs. Put into a bowl. Peel the courgette and blitz into fine pieces. Set aside and repeat for the onion, mushroom and garlic. Heat some oil in a frying pan and put in the courgette and onion pieces and fry for a couple of minutes. Add the Quorn if using and fry for another minute to thaw out. Next add the mushrooms and after another couple of minutes add the garlic and fry for one more minute. Add the sweet chilli sauce, tomato puree, garlic salt, pepper and dried herbs and stir well to combine. Spoon the mixture into the bowl with breadcrumbs. Blitz the red pepper with the basil then add this to the bowl. Give everything a good stir then use to stuff vegetables or meat. 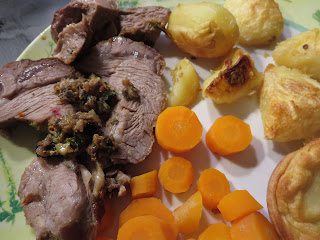 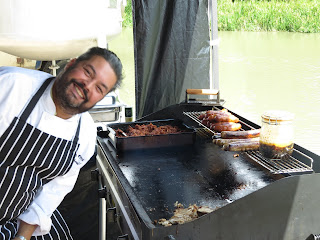 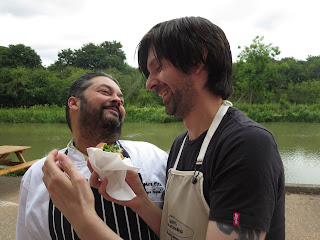 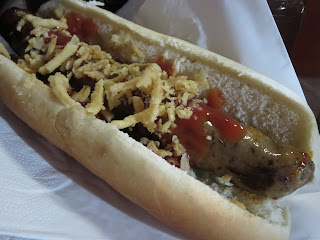 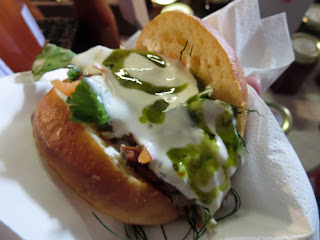 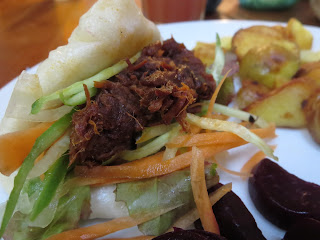