My Love Hate Relationship with Brambles

Brambles have got to be the worst weed in the world. They grow ridiculously quickly, they take root wherever a stem comes into contact with the ground and they are viciously thorny. I sometimes wonder, if humans suddenly died out, how quickly the world would be overgrown with the stuff.

I constantly battle with brambles that sneak in amongst my soft fruit bushes. The lovely redcurrant doesn't have thorns and should be a delight to harvest. But no... I reach in to grab a handful of ripe currants only to snag my hand onto some hideous unseen bramble branch winding its way through the bush.  And try as I might, I can't obliterate the stuff from my plot. Even with thick leather gloves on, the thorns can get through, or the stems can swing round and whip me across the face as I try to pull them out. Year after year it grows back despite my efforts.

They are ugly plants too when they invade other shrubbery. Garden hedges interwoven with bramble branches quickly start to look like something more suited to surrounding Sleeping Beauty's castle. The bramble that grows through my neighbour's hedge that overhangs the road scratches my car every time I drive past and threaten to take my eye out when I cycle past. The brambles that grow along the redways grow so quickly and so menacingly that I have been know to carry secateurs especially to chop them off and make the redways safe again.

But just at the point when I'm ready to declare out and out war on this weed, September arrives and the bramble breaks out into fruit and all is forgiven. Suddenly it seems to remind us all that it does deserve a place on the planet after all and out we go with our plastic bags and pick. Blackberrying must be the only form of foraging that every kid in the country as been introduced to at some point. They are the only wild berry that everyone can safely identify. And no autumn would be complete without an apple and blackberry crumble. 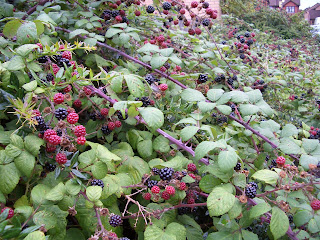 This year has been a particularly abundant year for blackberries so there are plenty for everyone. No excuse, get out there and pick yourself some and take advantage of this free food. You may as well because it won't be long before all we are left with are the horrible, invasive, spiky weeds that we all hate.

Just remember to take care because the blackberry may produce lovely fruit but it doesn't give them up without a fight. 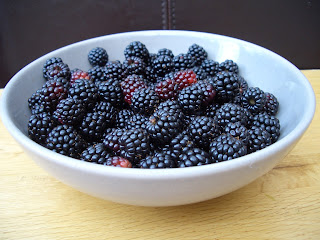 Place the apples, sugar, cinnamon, blackberries and water in a large pan and cook with the lid on for twenty minutes until fluffy – stir occasionally. In the meantime, preheat oven to 180°C (gas 4). In a bowl, add the flour, oats, sugar, baking powder and butter and use finger tips to rub into crumbs. Spoon the apple mix into a suitable ovenproof dish and layer the crumble mix on top. Level it off then bake in the oven for 30 minutes until golden brown. Serve with custard. 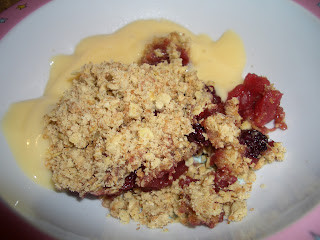 Putting the currant into Eccles cakes

When you grow a glut of something, you find yourself coming up with more and more inventive ways of using that particular fruit or vegetable to make the most of it and avoid becoming sick of it. I remember once, when faced with a glut of plums, racking my brains for new ideas for using them up. Having already made Plum Jam, Plum & Cinnamon Jam, Plum & Mulled Wine Jam, Plum & Orange Mincemeat, plum flapjacks, plum crumble and plum upside down cake I was beginning to struggle. Hmmm... what about plum pudding? Little Jack Horner sat in a corner, eating his pudding and pie. He stuck in this thumb and pulled out a plum and said, "What a good boy am I?". Plum pudding, a dish as old as the hills... but sadly, not made with plums it turned out on further research - just dried mixed fruit.

On another matter, I happen to be a huge fan of Eccles cakes. Always have been, even the ones you can buy in supermarkets (which are actually rather good). The other day when delivering some jam to Woodstocks Artisan Bakery, Matt asked, "Do you want to get anything whilst you're here." Silly question! And as they had Eccles cakes for sale the choice wasn't that difficult. 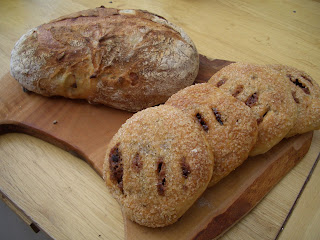 Then later, having polished those off I found myself fancying some more - well, you would, wouldn't you? But it was August and I usually only make Eccles cakes in the autumn when I can grate some apples or pears into the filling and neither of these fruits were ready. However, I was up to my eyes in a blackcurrant glut at the time so, hey, why not put some actual currants into them - not just those shriveled up grape things that call themselves currants.

And you know what? It really worked. Just 2 oz of blackcurrants was all that was needed to add to the dried fruit mixture and, my god, what a flavour revolution! Distinctly blackcurranty but not too much so, adding a depth of flavour not possible with dried fruit alone. I'm pleased to say that it made a large batch and I was able to freeze some so I have been enjoying them all over again this week and will certainly be making some more with the glut of frozen blackcurrants in my freezer.

So, that's the currants into Eccles cakes sorted... just need to crack the plum in plum pudding now the plums are ready... 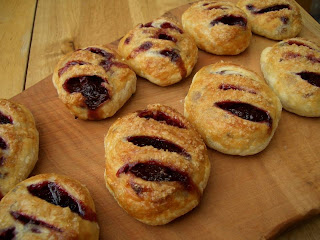 Preheat oven to 220°C, gas 8 and grease a baking tray. Melt the butter in a pan then stir in the blackcurrants and cook for 10 minutes until the juices are running. Add the dried fruit, sugar, spices and lemon juice and cook for a another 10 minutes then leave to cool completely. On a floured surface roll out the pastry. Use a large biscuit cutter (about 10cm in diameter) to cut out circles in the pastry. Place a teaspoon of filling into the centre of each pastry circle then bundle the pastry up over the filling. Turn the pastry bundle over and flatten with a rolling pin to make a thick oval biscuit of pastry with the fruity filling just showing beneath the surface. Slash the biscuit 3 times with a sharp knife then brush with beaten egg and scatter with Demerara sugar. Gather up the pastry trimmings and repeat until all the pastry is used up. Place the Eccles cakes on the baking tray and cook for about 20 minutes until golden brown. Alternatively, place the Eccles cakes on a tray and freeze raw. Can be cooked from frozen for about 25 minutes.

To make pear or apple Eccles cakes, substitute the blackcurrants with 2 whole fruit, peeled and grated into the dried fruit mixture.
Posted by Jammy Cow at 04:32 No comments: